Trump’s apparently serious bid to buy Greenland seemed like something out of The Simpson’s or SNL. It is not. It reveals something far more treacherous, like a ploy concocted by the villain in a superhero comic.

Setting aside the massive hubris of white privilege, that land and indigenous people can be bought and sold by colonial powers (and Trump has mentioned trading some US land away to make the deal), and setting aside the question of how to pay for it (perhaps by ignoring Congress and diverting funds from another source, like he did for his wall), his proposal means he believes in climate change and wants to profit from it—from the suffering of billions and the destruction of earth as we know it.

It’s not hard to understand the mastermind of Trump. His strategies are as transparent as a third grader’s plotting to steal cookies. At the Arctic Council meeting in May, Secretary of State Mike Pompeo dismissed climate concerns and instead highlighted “new opportunities for trade” created by the melting ice, the “opportunities and abundance” created by an ice-free Arctic. In preparation for the Arctic summit, Pompeo was probably briefed about the economic opportunities of an ice-free Arctic Ocean—not just the shipping lanes but also the massive reserves of oil under the seabed. And perhaps that briefing mentioned Greenland, with massive reserves of coal and uranium and an estimated 13% of the world’s undiscovered oil reserves.

They’ve also figured out that Greenland is melting. And it is melting much faster than climate scientists predicted. A new report by NASA revised its estimate of sea level rise from Greenland alone from 3 feet to 5 feet over the next 200 years. During a heat wave last month, it melted at a rate that it was not predicted to reach until 2070. While billions will be underwater, Trump sees opportunity and abundance.

A dramatic photo of pooling meltwater on sea ice off Greenland. July, 2019.

In the same way he has hijacked the Republican Party and wed it to a small and diminishing demographic (rural white men), he has wedded his personal investment strategy to “disaster capitalism”, a plan to make money off the destruction of the earth. Along with all of Big Oil and the Republican Party, he has a financial conflict of interest with curtailing CO2 emissions. If Greenland was part of his investment portfolio, he’d also have a conflict with solutions to climate change. He’d even have a conflict with a magic technological breakthrough that sequesters carbon. He’d need the ice to melt.

He has become the diabolical villain of superhero cartoons. The desire to make money off the destruction of the earth is not only an impeachable offense, it disqualifies him from any responsible role on the planet. He is a threat to all humanity and the world.

The only superhero to thwart him is us, the unorganized millions. It’s time to stop tweeting about his hair and his wife and his rudeness and his gaffes. It’s time to think strategically and take to the streets. It’s time to make his life a living hell before he does that to the planet.

Of the top 20 birding sites in the entire United States, based on the number of species reported on eBird, six of them are in south Texas. Two of them, Bentsen-Rio Grande Valley State Park and Santa Ana National Wildlife Refuge, are threatened by Trump’s proposed wall. 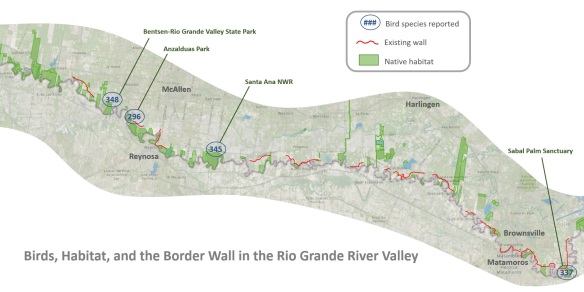 The map above, taken from an excellent article illustrating all of the natural resources at risk from California to Texas, includes the bird totals for the eBird hotspots associated with the at-risk parks and wildlife refuges. The wall is often constructed hundreds of yards north of the actual border (the Rio Grande River). It typically includes a swath of cleared land on each side of it.  At Bentsen and Santa Ana, the wall threatens to destroy critical remaining habitat and strand the parks in “no-man’s land”, preventing public access. Dozens of articles have been written regarding the impacts to everything from butterflies to ocelots.

Sabal Palm is unique, in that the natural area is south of the wall. Visitors pass thru the wall in order to visit the park. However, there is no guarantee this arrangement will be made at other sites. Should public access be denied at Bentsen, the park could revert back to the Bentsen family per a historical agreement. The national wildlife refuges are especially at risk. As they are already federal properties, the Administration doesn’t have to deal with acquiring private property. Thus, they are the easiest places to build.