There have been several mass extinction events in the history of the earth, most of them caused by global warming due to “sudden” releases of carbon into the atmosphere, and it only took an increase of 4 to 5 degrees Celsius to cause the cataclysm. The current carbon emissions rate is 10 to 100x faster than during those events. And we’re already a quarter of the way there in terms of warming. 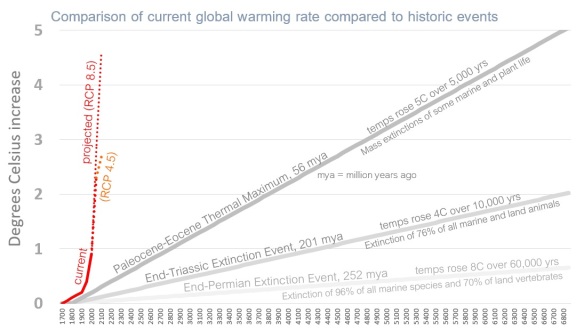 The current warming trends, RCP 8.5 and RCP 4.5, refer to estimates of carbon emissions under high and moderately low projections by the International Panel on Climate Change. The straight lines on the extinction events are approximate; there may have been episodic spurts and stops as different thresholds, positive feedback loops, and other natural events occurred. But these lines connect the dots we have.

The earth is 4.5 billion years old. Land animals with backbones didn’t really evolve until 300 million years ago (mya), so we’ll start there.

The most massive mass extinction event in the history of the earth was the End-Permian extinction event (also known as the Permian-Triassic extinction event or the Great Dying) 252 mya. It was caused by a massive release of carbon. The equatorial regions, both on land and in the ocean, were too hot for most life forms, including plants. The cause of the warming event is debated, but was most likely due to a series of volcanic eruptions from the Siberian Traps that lasted two million years. The extinction occurred during an initial 60,000 year period, which is “sudden” in geologic terms. Recovery of the ecosystem, basically a whole new evolutionary period to create new animals, took 2 to 10 million years.

The End-Triassic extinction event came next, 201 mya. It was also associated with volcanic activity and the massive release of carbon, this time from the mid-Atlantic ridge. It probably triggered a positive feedback loop, with melting permafrost releasing tons of methane. The extinction period, affecting plants and animals, lasted about 10,000 years and paved the way for the rise of the dinosaurs.

The dinosaurs dominated after that, until all but the avian dinosaurs (the ones that evolved into birds) were wiped out by another mass extinction event 66 mya. This may have been caused by a comet or asteroid striking the earth, or by extreme volcanic activity creating global warming similar to the other events here (8 degrees Celsius over 40,000 years). This one is not shown on the graph.

Finally, there was the Paleocene-Eocene Thermal Maximum (PETM) and associated extinction event 56 mya. Likely caused by a combination of carbon and methane releases, this global warming event is the most recent, offers the most evidence and information, and is most analogous to climate change today. The continents were in roughly similar positions as today. The warming, 5 degrees Celsius in about 5,000 years, wiped out much benthic marine life, pushed the tropics to Wyoming and alligators to the Arctic Circle, warmed oceans to 97 degrees, and made the equatorial regions too hot for many species. The PETM is well-studied, with hundreds of papers available on-line, plus quite a bit of media coverage.

The high temperatures lasted for about 20,000 years. Eventually, the Arctic Ocean became covered with algae. These algae slowly absorbed CO2. When it died, it sank, taking the carbon with it to the bottom of the sea, lowering the carbon in the atmosphere and cooling the earth back to normal. This process took 200,000 years.

Climate change during these past events, considered rapid in geologic time, would have scarcely been noticed by animals on the ground. Animals didn’t go extinct by dropping dead; they just had a lower reproductive rate such that their populations slowly declined until none were left. Also, they evolved. In fact, there was a pulse of evolution during the PETM, producing, among other things, the first primates.

The current warming is 10 times faster than during the PETM. It is noticeable within the lifespan of an individual animal. Adaption thru evolution is not an option. Scientists mince no words:

“We conclude that, given currently available records, the present anthropogenic carbon release rate is unprecedented during the past 66 million years. We suggest that such a ‘no-analogue’ state represents a fundamental challenge in constraining future climate projections. Also, future ecosystem disruptions are likely to exceed the relatively limited extinctions observed at the PETM.”  – Zeebe (2016)

The PETM raised average earth surface temperatures 5 C. We’re at 1.1 C now, with probably up to 2 C already built into the system, meaning we’ll reach that even if we stop all carbon emissions tomorrow. We’re likely to reach 2 C even if we dramatically reduce emissions and successfully implement Direct Air Capture of ambient CO2 in the atmosphere. Assuming business as usual, we may reach PETM levels in 140 years.