In January 2020, Lawrence Livermore Laboratory released their detailed report Getting to Neutral: Options for Negative Carbon Emissions in California. It provides a detailed plan, with estimated costs, to reach California’s goal of net-zero by 2045, and net-negative thereafter, thus reducing carbon in the atmosphere and potentially returning it to pre-industrial levels.

Chapter 2 focuses on natural solutions, which are among the cheapest options for sequestering carbon. However, they are also all limited by the number of acres upon which we can apply them. There are only so many acres of forests, wetlands, etc. By far, the largest (and cheapest) option in this category is changes in forest management.

The easiest way to increase carbon sequestration is to change to the way forests are managed. Specifically, those changes include increasing harvest rotation length, maintaining stocks at a high level, and increasing productivity by removing diseased or suppressed trees. Negative emissions are based on ongoing sequestration of carbon, which may include the transfer of harvested carbon to durable wood products. These practices would sequester 15.5 million tons/yr at a cost of $0.80/ton.

Analogous to current ethanol production, Chapters 3 and 4 call for turning leaves, branches, almond hulls, and human garbage into biofuels, but then also capturing the CO2 and burying it in old oil fields. A small part of the plan includes sequestering, rather than releasing, the CO2 produced during ethanol production. In terms of sequestration, this is the largest plank of the plan. It envisions a massive shift from fossil fuels to plant-based fuels, complete with new pipelines to transport and bury the CO2. It relies heavily on the Central Valley’s agricultural sector and old oil fields. The plan assumes existing crops and does not consider planting crops purely to create biofuels; thus, it does not displace food production.

Here is where the biomass would come from:

Slag from logging, sawdust from sawmills, cleared shrub and chaparral. This would sequester 24 million tons/yr.

This would sequester 13 million tons/yr.

These would sequester 13 million tons/yr.

Landfill and anaerobic digester gas. This would sequester 6 million tons/yr. 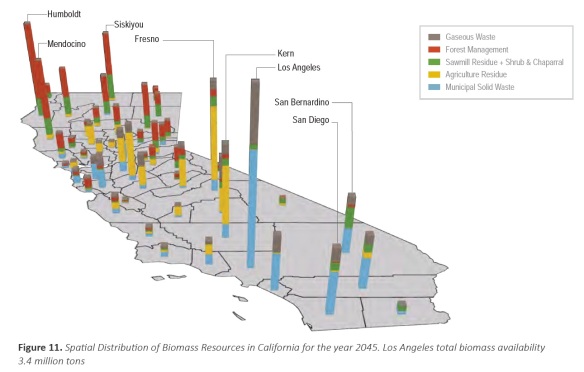 The cost depends on the biomass collection, transport, biofuel conversion process, and CO2 transport for sequestration. All of these will vary in order to provide a suite of biofuel energy needs (e.g. electricity, transport fuel, etc.). Overall, this biomass fuel network would sequester 83 million tons/yr at an average cost of about $60/ton (ranging from $29-96/ton).

Chapter 5 of the report goes into detail about direct air capture (DAC) technology, machines that would suck carbon out of the air and store it in underground (primarily around oil and gas fields in the Central Valley). The report highlights DAC’s unlimited potential in sequestering carbon, but also its high energy demands (and thus expensive cost). In the end, they focus on two main options:

They reject solar and wind-powered DAC as requiring too much land for the energy needed. They do not explore nuclear-powered DAC, such as fourth generation thorium reactors.

All of Chapter 6 is dedicated to long-term geologic storage. They conclude that oil and gas fields in the Central Valley offer the greatest promise, and that “these areas will be safe and effective storage sites. At depths below 3,000 feet, CO2 converts to a liquid-like form that has about the same density and viscosity as oil.”

Their initial cost estimates for DAC exceed $200/ton, though they assume, with learning, an eventual cost of $190/ton. 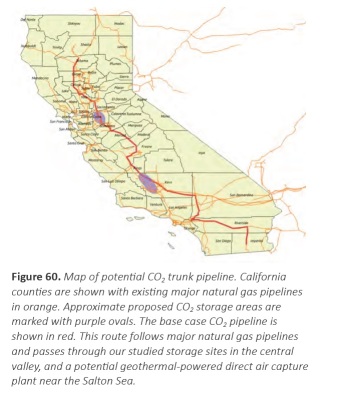 Chapter 7 dives into the logistical details and infrastructure needed to connect the gathered biomass to the biomass fuel plants and the DAC plants to underground storage reservoirs. Among their main conclusions:

Chapter 9 explores total system cost under several scenarios. They note there is “considerable flexibility among the technology pathways and scenario options.” Table 40 offers the optimum combination of technologies, sequestering 125 million tons per year (and avoiding another 62 million tons in emissions avoided) for a total of $8.1 billion/year, which is an a total average cost of about $65/ton. 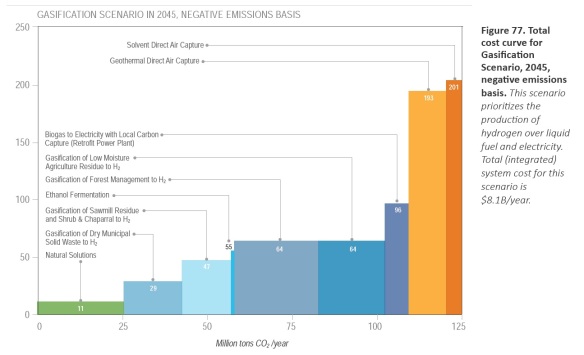 The Role of State Government

There is a plan for California; will it be implemented?

The report does not go into specific policy initiatives or economic incentives necessary to jump start, implement, or transition to this plan. I will address that in another post. Their only mention of public policy is with regard to the CO2 pipeline, where the report notes: “industry experts have expressed concern about the costs and legal difficulties of obtaining rights-of-way for new pipelines in California. One power company shared that running CO2 pipelines on existing natural gas rights-of-way requires renegotiating with the landowners because CO2 pipelines are higher pressure and thus are not covered by existing agreements.”