In 2006, I wrote a paper about the spread of the non-native Eurasian Collared-Dove into the Central Valley of California. At that time, there were about 43 records. Now, of course, the species is widespread and common. Quoting from that paper, here’s the backstory of their spread throughout North America:

The Eurasian Collared-Dove was first observed in Florida in the late 1970s. These birds likely originated from an accidental release in the Bahamas in 1974. Since then, their spread has been well documented by Christmas Bird Count and by state bird record committees. By the mid 1990s, the species had been recorded throughout the southeast United States. By 2000, Arizona, Idaho, Oregon, Utah, and Washington had documented records. On the 106th CBC (December 2005 – January 2006), over 30,000 individual birds were reported nationwide, compared to just 560 fifteen years earlier. Their rate of increase has averaged 34% per year.

Today, it seems that in any large aggregation of Eurasian Collared-Doves, there are one or two that are unusually pale, blotched with white and cream. They seem to be about 1% of the population or more, though it’s yet to be studied. These birds bare a strong resemblance to African Collared-Doves, which is generally this pale.  However, based on the dark outer web of the outermost tail feather (see below), as well as size and vocalizations, these birds are clearly leucistic Eurasian Collared-Doves.

All of the photos on this page involve the same two darker doves and one pale dove. Above, the tail patterns of the dark dove (left) and pale dove (right) both suggest Eurasian Collared-Dove.  Woodland, California, October 2018.

Many birders suspect this is due to the Founder Effect, a phenomenon that occurs when a small population colonizes a large area. Eventually, all of the birds (or other animal species) are descended from few individuals. In this context, certain recessive traits that were once rare may become more common.

See the Wikipedia account of the Founder Effect for examples of this in human populations. 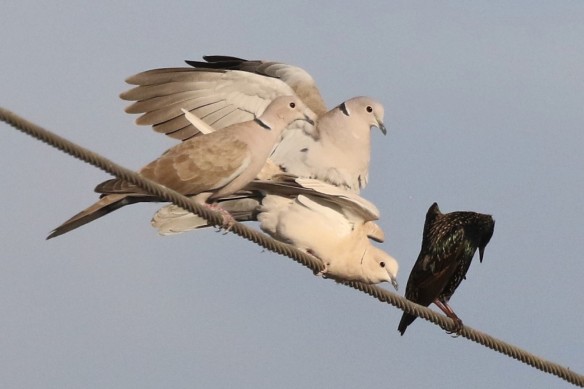 Here, one of the darker doves is mating with the pale dove.