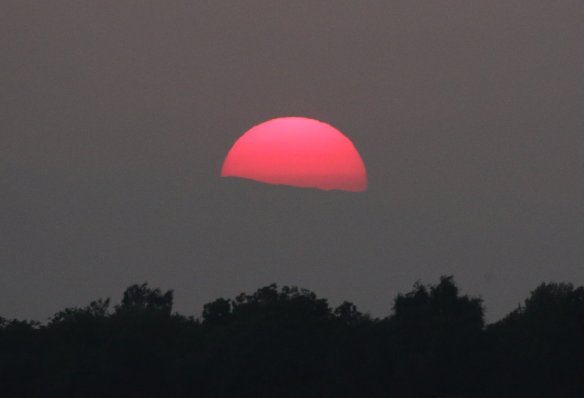 Sunset from the Central Valley, looking toward the Coast Range through the smoke of a million trees.

As I write this, helicopters are passing overhead in a dim gray-brown sky. The sun is a pink orb over the western horizon. It is 97 degrees at 7pm. The people of California sit like frogs in a slowly boiling pot.

Average temperature for July and August, here in Davis, is 93 degrees. But in the past 34 days, it was only below that six times. July 2018 was the hottest month in the history of the state.

Such climate change was predicted, with great accuracy, by both oil companies and government scientists back in the 1980s, and even earlier.  The consequences of this included more extreme weather, more drought, shorter rainy seasons, earlier snow melt, longer fire seasons, and larger fires. All that is coming to pass in such dramatic fashion that new records are set each year.

Note: There were more mega-fires in November, 2018, shortly after I wrote this. These graphs are updated in a more recent blog post “Hell in Paradise: Why the Camp Fire was the largest climate-induced mass mortality event in modern history” 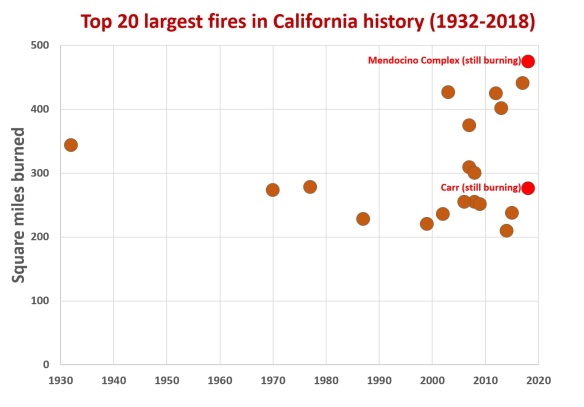 In 1988, scientists were excited– and alarmed– to see the first indications of a warming climate. Now, graphs illustrating climate change need no statistical analysis. They are obvious to a child, ramping steeply up with each passing year. 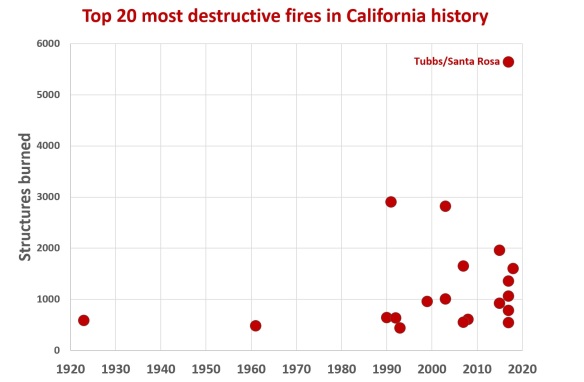 A conservative talking point seems to be that this dramatic increase in fires is not due to climate change, but to poor forest management. While this has been an issue for over a hundred years, this question was the prime focus of Westerling et al 2006 in Science, where he concluded that longer hotter summers and shorter drier winters were indeed to blame. There were increased fires even in areas without poor management– or any management at all. Where there has been poor forest management, climate warming has acted as a “force multiplier” to make fires even worse. One could only imagine how easy it would be to write that paper now, twelve years later, with plenty of new eye-popping data points.  Thirteen of California’s 20 largest fires have occurred since Westerling sent his paper to the publisher.

Perhaps the best illustration of the combined effect of poor forest management and climate change comes from this 14-minute Ted talk given by Paul Hessburg in 2017.

Using a useful forest diagram, he explains how Native Americans regularly burned underbrush and maintained an open forest/meadow ecosystem that effectively prevented large wildfires. In the late 1800s, with the ethnic cleansing of Native Americans, the advent of cattle that ate the grass, and the US Forest Service suppressing fires and logging the largest trees, our forests changed from a mosaic of tough old trees surrounded by natural fire breaks to a solid crop of young growth. Add drought, heat, and an ignition source, and you see the results above. 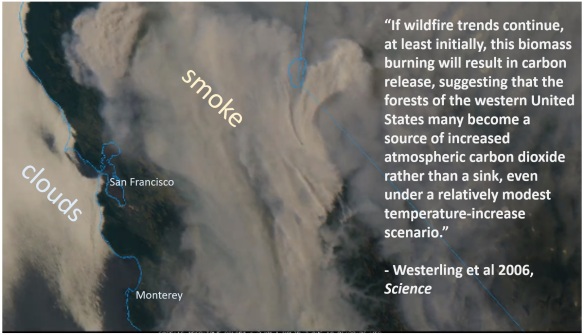 The solution, regardless of how much you attribute large fires to climate change or management, is the same. We need to re-create the balance of the past thru the protection of large trees and prescribed burns. We need to create meadows and healthy forests. Some Native communities in northern California are planning to do this.

This all assumes that we get enough rain in winter and cool temps in summer to allow re-growth. Otherwise, the current fires may be transforming California’s mountain habitats into something resembling the mountains of Nevada and Arizona in the span of a decade.