The people of Richmond did not like our choice for a restoration project; they wanted a different one. They called us racist. At first, we were perplexed. Eventually, I realized they were right.

As a natural resource economist for the California Department of Fish and Wildlife, it was my job to assess injuries to wildlife and habitat due to pollution events, and to seek compensation, thru restoration, to “make the public whole.” Working with partners from the US Fish and Wildlife Service, NOAA, and other state and federal agencies, we enjoyed our work— suing oil companies and using the recovered funds to do habitat restoration. We were “the trustees”; we represented the people and the natural resources and acted on their behalf. We were the Lorax; we spoke for the trees. We had been as innovative as we were successful, pioneering seabird restoration on breeding colonies in Canada, Alaska, Mexico, and even New Zealand to benefit bird species killed by oil spills in California. Those were the only places they nested, so we did what made the most biological sense.

In 2012 we began assessing damages to Castro Cove in San Pablo Bay near Richmond. It had been contaminated by oil, mercury, and lead associated with the adjacent Chevron refinery. To compensate for the injuries (in addition to cleaning up Castro Cove), we proposed to restore saltmarsh wetlands at Cullinan Ranch, part of San Pablo Bay National Wildlife Refuge, about ten miles to the north. We immediately met opposition from locals. They wanted the settlement funds to stay in Richmond; Cullinan Ranch was too far away.

We have project selection criteria set in federal regulations. Top of our list is always nexus— we aim to restore the same type of habitat and species that were injured. But there are also other things to consider: feasibility, partnering funds to make the project bigger, cost (bang for the buck), etc. When it came to evaluating restoration options, Richmond had little to offer. The refinery was merely one of several industrial or former industrial sites along their bay front. Contamination issues were everywhere. A poster child for environmental injustice, Richmond is also poor and predominantly non-white. We thought Cullinan Ranch was a good solution.

The people of Richmond wanted us to spend the funds restoring Breuner Marsh. This was a 238-acre parcel just north of Castro Cove wedged between the bay and the railroad tracks. Across the tracks was Parchester Village, a housing tract built after World War II to house African Americans enticed to move there and work in the nearby factories. It was one of the few places offering FHA home loans to non-whites. They came primarily from Louisiana, a land of marshes. They would cross the tracks and enjoy the wetlands as a place to hunt and fish. To this day, Parchester Village remains predominantly black. Whitney Dotson, and his father Reverend Dotson, have been fighting development proposals there, by a man named Breuner, for decades.

Initially, we, the natural resource trustees, fought the people of Parchester. The Cullinan project exceeded the Breuner project by most criteria. It was already part of a protected refuge. It had ten feet of elevation gain to buffer sea level rise. And the project, modifying the levee system, promised to restore 1500 acres; it had serious bang for the buck. And we asserted that ten miles away was no big deal.

But the distance was a big deal, and we didn’t understand why. I did not understand that other subcultures in the US don’t hop in their Prius and drive an hour to see a rare bird like me. They don’t throw their kayak on their Suburu and head for the boat launch. Nor were the people of Richmond, working two jobs and long shifts, going to drive to Cullinan, which had little parking and no bus service. They wanted to protect and restore their own marsh across the tracks from their neighborhood. They knew, better than we, that using our criteria, places like Marin County across the bay, one of the wealthiest counties in the nation, would win every time. No prior contamination? Check. Partnering funds? Lots. Contiguous with other protected areas? Of course.

When the people we are supposed to be compensating are complaining about our proposal, that’s a red flag that perhaps our criteria are biased, our evaluation is wrong, and that their values are not the same as our values. And they are the ones who matter. As trustees, we were supposed to ensure the compensation of the impacted people. We are obligated to see the world through their lens. 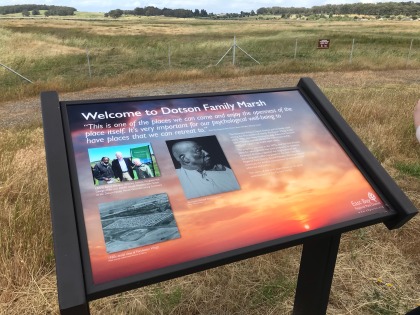 The $14 million dollar project has re-contoured the wetlands and planted native grasses, as well as extended the Bay Trail with a paved bike path, parking lot, and restrooms. When I visited recently, two Golden Eagles, normally rare next to the Bay, skirmished over a kill in the grasses.

A similar conflict arose in Mississippi after the Deepwater Horizon oil spill. At a contentious public meeting between the predominantly African American public wanting one type of restoration and white agency scientists proposing another, one exasperated woman stood up and asked, “Why are you all white?” When the government officials told me about this, they were scoffing. But it’s a great question. We all know the answer. They got their positions in government because they had college degrees. This in turn was highly correlated with a good high school and a good neighborhood. The money that financed all that started with their parents or grandparents, who probably began accumulating their family’s wealth after a subsidized college degree and home loan thru the GI Bill, or an FHA home loan, or maybe even a free plot of Native land via the Homestead Act, all programs that built the white middle class—and largely excluded people of color. The odds of a black person qualifying for one of these government positions were slim. That’s why that panel of restoration experts was all white. And they brought their cultural values with them.

In the end, we caved in and split the funds between Cullinan and Breuner (begrudgingly). I went to the Breuner Marsh project dedication ceremony, which featured speeches by both Whitney Dotson and Representative George Miller. There I learned everything I should have known earlier. That the people of Parchester Village had been fighting to save that marsh for decades.

They have since renamed the marsh; it is now the Dotson Family Marsh.