I live in Yolo County, California, near Sacramento, where Mountain Plovers used to be an annual winter specialty. Searching for “dirt clods with legs”, we used to be able to find dozens of these unique shorebirds, sometimes over a hundred.

Those days are over. They are now “irregular”, meaning we don’t find them every year. We’ve struck out five of the last eleven years. Before that, we averaged a high count of 72 individuals. The first graph, built from records in the Yolo Audubon Society newsletter, emails to the Central Valley Birds listserv, and eBird, shows the high count each winter in Yolo County. 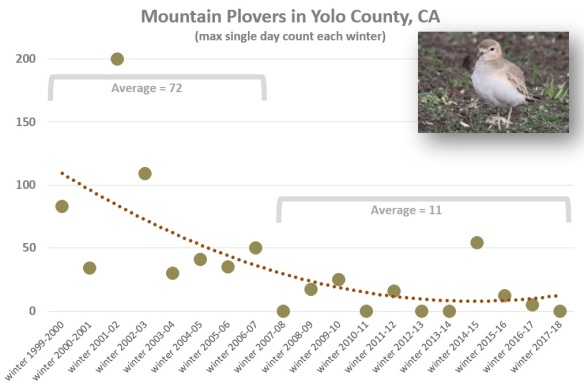 This second graph backs out a bit in space and time, looking at all Mountain Plovers worldwide, starting in 1980. They are a bird of the steppe, breeding mostly on the Great Plains between the Rockies and the flat lands, between the Canadian and Mexican borders. They winter in open country in a vast arc west and south of there, mostly in California, Arizona, New Mexico, and Texas.

All the Christmas Bird Counts nationwide, plus Mexico, averaged 728 birds per count thru 1994, but have never hit that mark since. Fewer than 200 individuals have been enumerated six of the last ten years. Adjusted for party hours, the graph basically looks the same.

3 thoughts on “The decline of Mountain Plovers in two graphs”